Looking across San Diego's Harbor at beautiful Downtown San Diego and the Star of India, currently home-ported at the San Diego Maritime Museum.

The other ships belonging to the Maritime Museum are always docked to the north of the Star of India.

Looking across San Diego's Harbor at beautiful Downtown San Diego and the Star of India, currently home-ported at the San Diego Maritime Museum.

When she sails, the Star of India often remains within sight of the coast of San Diego County, and usually returns to her dock within a day. She is sailed by a skilled volunteer crew of Maritime Museum members, who train all year. She has become one of the landmark ships in San Diego's Harbor.

Star of India was built in 1863 as Euterpe, a full-rigged iron windjammer ship in Ramsey, Isle of Man. After a full career sailing from Great

Britain to India then to New Zealand, she became a salmon hauler on the Alaska then to California route. After retirement in 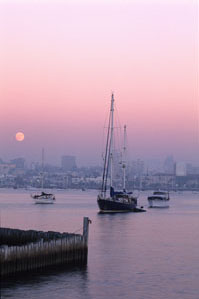 1926, she was restored between 1962 and 1963 and is now a seaworthy museum ship ported at the San Diego Maritime Museum in San Diego, United States. She is the 2nd oldest ship that still sails regularly and the oldest iron hulled merchant ship still floating. The ship is both a California and United States National Historic Landmark.

San Diego is renowned for its beach resorts, amusement parks, wildlife parks and zoos as well many museums and beaches. The region is also home to a large home grown surf and skateboard culture hosting many surfing events on its 70 miles of coastline.

San Diego Bay, a natural harbor considered by some one of the best on the North American west coast. The bay is flanked by the San Diego International Airport, the busiest single runway airport in the world and the Port of San Diego, one of the busiest on the American west coast. In its boundaries is a world city, the City of San Diego which is classified as a gamma world city[citation needed] and nicknamed Americas Finest City. With a population of over one million, San Diego is the second most populous city in California, and the eighth most populous in the United States. Money Magazine rated it the fifth best place to live in 2006 and according to Forbes the city ranks as the fifth wealthiest in the United States.

The city is composed largely of many sciences (biotechnology/bio-sciences & computer sciences) as well as electronics manufacturing, defense-related manufacturing, financial and business services, ship-repair, ship-construction, software development, telecommunications, wireless research, agriculture and tourism. Located in the metropolitan area, San Diego, is also host to the University of California, San Diego, located in the coastal community of La Jolla. San Diego Metro can also be applauded for being host to one of the largest naval fleets in the world, as well as having become the largest concentration of Naval facilities in the world.